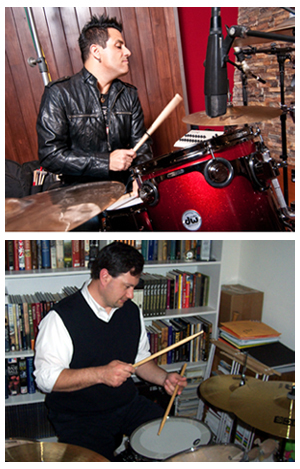 Voted as the “Best Drummer in Country Music” Rich Redmond is a recording and touring drummer based in Nashville, Tennessee. He is best known as the tenacious timekeeper for the Jason Aldean Band and has played for audiences around the world. An experienced clinician and teacher, Rich attended the prestigious University of North Texas where he obtained a Master’s Degree in Music Education.  Visit Rich’s website.

Rich’s co-author Michael Aubrecht is an award-winning/best-selling author, historian and documentary film producer, as well as a percussionist with a competitive-music background. Michael initially uncovered the concept of using elementary-school teaching techniques while he was showing his 4-year old son how to play drums. Visit Michael’s book blog.

Rich and Michael have combined their creative talents to develop the FUNdamentalsTM of Drumming for Kids program. With a motivational speaking program, hundreds of articles, dozens of books, and multiple film, radio and television credits between them, Rich and Michael have extensive experience as guest speakers and clinicians (Download Media Kit). Contact the authors via booking@richredmond.com.